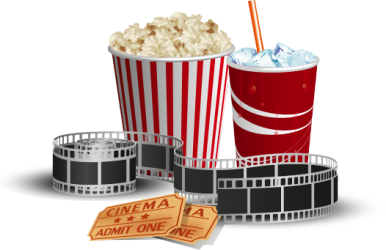 Here is some vocabulary to describe different types of film and some people connected with the cinema. Practice these and other Phrases with your online English Teacher at skypeclass.com

A horror film: A film that scares you
A science fiction film (a sci-fi film): A film set in the future, or an imaginary world and time
An action film: A film with lots of chases, violence and strong heroes

Types of film that don’t need the word ‘film’ in the name:

A comedy: A film that makes you laugh.
A drama: A film about human relationships and life
A thriller: A film that keeps you excited

A period drama: A drama set in a definite historical period
A romantic comedy (A rom com): A comedy that is also a love story
A psychological thriller: A thriller that has a lot of suspense and fear

A film review: A report about a film, usually with opinion
A film critic: A person who writes film reviews
A film premiere: The first time a film is shown in a country
A film star: A famous actor from films
A film-maker: A person who makes films: a film director
A film festival: A special event when many different films are shown
A film buff: Someone with a very detailed knowledge of films
A film-goer: Someone who regularly goes to the cinema